Design Ideas for a Small Bathroom: Do You Really Need that Bathtub?

Lyndon B. Johnson once said that every man has a right to a Saturday night bath. Kind of an odd statement, since baths—not showers—were still the primary way people bathed during most of Johnson’s life. (You’d think showers would be the luxury.) Today, baths really have become the special, occasional treat Johnson made them out to be, while showers are most people’s go-to way to wash up. That’s why it’s a good idea to ask yourself: Do I really need that bathtub?

Don’t get us wrong. Every house should have at least one bathtub. (A) Some people still prefer them, (B) they’re a necessity when bathing young kids, and (C) a relaxing Zen soak is good for what ails you. A home without a bathtub, at least in a buyer’s eyes, is incomplete. The question we’re asking here is not whether you need any bathtub but whether you need THAT bathtub—the second or even third one in your home. 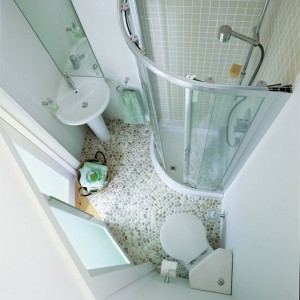 If you are looking for design ideas for a small bathroom, why not consider removing the bathtub and having just a shower stall? Showers can be situated in a corner. They can have a smaller footprint than your average tub. And even if you go for one of the larger ones, with the use of glass doors, the room will visually appear to be more open.

Want to nix the tub in the master bathroom? That isn’t such a strange move either. In particular, it’s being done more and more often by people who own homes built in the 1980s and 1990s, the era of the big, deep, space-gobbling soaker tubs. Busy homeowners are discovering they’d rather have a nice big shower they’d actually use than a nice big jacuzzi tub that’s collecting dust. In fact, Design Basics, which publishes Her Home magazine as well as stock building plans for homes, recently noted in an informal poll that 1/3 of women but less than 10 percent of men wanted a tub in the  master bathroom if the bathroom also had a larger shower.

Imagine how open your bathroom could feel without the tub taking up space. We’ve found it’s the perfect solution for many homeowners who want a more spacious bathroom without knocking out any walls. Give us a call to talk about what your bathroom would look like if you told the tub to take a hike!