Privacy, Please: How to Reduce the Shame Factor in Your Guest Bathroom 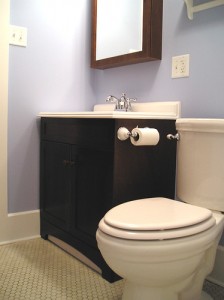 Funny thing about bathrooms: People are happy to talk about how to beautify and organize them, but mum’s the word when it comes to factoring in the Big Deed for which they really exist. Set aside any Victorian sensibilities for a moment, because this is a discussion that needs to be had when building or updating a guest bathroom.  That’s because toileting away from home is distressing for a lot of people. Some approach it almost like a covert operation. They don’t want to leave a shred of evidence that they’ve actually done the deed—not one sound, sight, or odor. We’ve all been there.

One of the most important items for your guest bathroom is a good ventilating fan. The fan helps not only with odors but also with drowning out sounds. Problem is, many people are embarrassed to turn on the fan in a bathroom when others are in earshot. It’s sort of a loud announcement of what’s to come. This is where a fan/light combination switch comes in handy. When the light goes on, so does the fan. Nobody has to be embarrassed about turning it on.

Ever clogged a toilet at someone else’s home? Few things are more embarrassing, especially when there isn’t a plunger to be found and you have to report your offense to the host. Always keep a plunger in your guest bathroom, in a place where guests would intuitively look for it. Make sure there’s a discreet, sanitary way for them to put it away after use, too. You could even go one step further by installing a macerating toilet system, which is a toilet equipped with a rotating blade that pulverizes human waste and toilet tissue into a slurry as it goes down the plumbing. Your toilet will never be clogged again.

Lowering the shame factor for guests can be a matter of simple changes, like keeping the guest bathroom door closed at all times. That way, when guests are done in the bathroom, they don’t feel self-conscious about closing the door as they exit so the fan can take care of business. If you go this route, keep a little “Occupied/Unoccupied” sign on the doorknob so that guests won’t needlessly wait outside an empty bathroom. Keep extra rolls of toilet paper where guests can easily see and reach them from the toilet. Have scented oils or an air freshener going in your bathroom round-the-clock but also provide a room-deodorizer spray with a matching scent (so that guests won’t feel they’re leaving a dead-giveaway spray scent behind them). By the way, for your guest bathroom wastebasket, one with a hinged lid is ideal so that female guests can discretely dispose of feminine products.

If you don’t think people really care so much about whether others know what they’re doing in the bathroom , consider the fact that there is actually an app out there called Fake Shower, one that more than 10,000 people have downloaded in order to make the sound of running water (without having to waste water) while they use the john! Yes, your guest bathroom should look beautiful and inviting, and that’s where the heart of remodeling discussions lies, but don’t forget about what that bathroom is really for—and how to preserve your guests’ dignity when using it!