Your Shower Head…Not So Clean 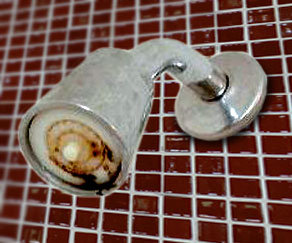 Is your shower head filled with bacteria? Probably.

You probably clean your bathroom once a week. Maybe every two? We aren’t judging!

Have you taken the time to clean the shower head? We’re not just talking about scrubbing it down, but really, really cleaning it…which would include taking it down and really cleansing it.

A recent study from the University of Colorado offered some disturbing results – your shower head could be spraying you with potentially pathogenic bacteria.

Scientists studied just 50 shower heads from 9 cities in seven states and discovered that 30% of them had “significant levels of Mycobacterium avium, a pathogen linked to pulmonary disease that most often infects people with compromised immune systems but which can occasionally infect healthy people.”

Now…before you freak out, know that it isn’t something new to find certain pathogens in municipal water…so says the researchers. But, “the CU-Boulder researchers found that some M. avium and related pathogens were clumped together in slimy “biofilms” that clung to the inside of shower heads at more than 100 times the “background” levels of municipal water. If you are getting a face full of water when you first turn your shower on, that means you are probably getting a particularly high load of Mycobacterium avium, which may not be too healthy”.

So…are you going to run upstairs and take that shower head down and clean it right now? Here’s a tip, soak it in a bowl of white vinegar for a few hours or even overnight and then use an old toothbrush to clean all of it…then make sure to rinse it!

One more thing… “one shower head in the study with high loads of the pathogen Mycobacterium gordonae was cleaned with a bleach solution in an attempt to eradicate it, said Pace. Tests on the shower head several months later showed the bleach treatment ironically caused a three-fold increase in M. gordonae, indicating a general resistance of mycobacteria species to chlorine.”

Thinking about getting a whole new shower/tub or even bathroom yet?