The Great Toilet Paper Debate: Which Way to Roll? 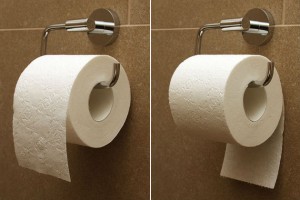 Which way do you orient your toilet paper on its roll? The Great Over vs. Under Debate has been around as long as toilet paper rolls have. It’s been the topic of dozens of legitimate sociological and marketing studies. It’s drawn the interest of engineers and inventors. And it’s even the subject of the last line Ann Landers ever wrote for her famous syndicated advice column.

When Landers was initially asked by a reader about the proper orientation for toilet paper, she responded that it was under—with the loose end toward the wall. Her advice caused enough of a backlash that she later reversed her decision and advised readers go with over. Lo and behold, the unders then came out in force, penning passionate letters of their own. Years later, when a reader asked Landers which way to hang bathroom towels, she declined, saying she was never giving advice on which way to hang things again. It’s interesting to note that Landers once confessed to a sin lots of people commit: re-orienting other people’s toilet paper rolls when using their guest bathrooms!

Over the past couple of decades, at least two inventors have come up with solutions to the battle over toilet paper orientation. The Tilt-a-Roll and the T.P. Swivel both offer a holder that can be spun and angled to get the toilet paper roll into whatever orientation the current user desires. Judging by the age-old argument over which way to leave the toilet seat—up or down—we can’t help but wonder if they’re not just substituting one conflict for another. Before you know it, married couples will be filing for divorce over disagreements about the proper angle at which to leave a Tilt-a-Roll.

If Landers can’t resolve the matter, and inventors are filing patents over solutions, we wouldn’t dream for a minute that we could broker a peace agreement. We can only point out that in every study ever published about toilet paper orientation, the overs have come out on top. The margin is sometimes petty large, as much as 70 percent. And it’s not that the other 30 percent prefer under. A small percentage of people just don’t give a hoot.

Whether you’re an over or an under, here are some talking points for you to pull out next time you and your roommates, office mates, kids, spouse, or significant other are in a heated debate over which way to leave the toilet paper roll: