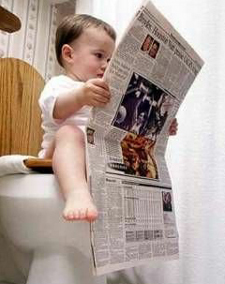 Reading at an early age on the toilet – a learned behavior!

Research shows that at least half the people in the civilized world catch up on reading while using “the john”. It’s one thing to bring your own reading materials, but is it sanitary to keep a stash of them in the bathroom? Many designers as well as do-it-yourselfers are doing just that, building bookshelves and magazines racks into the décor of the room. Our thoughts? Probably not a great idea, especially if you have a toilet with a powerful flush. 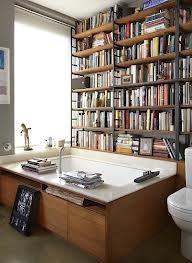 Great idea..but the germs from the toilet are not cool!

Most toilets can spray solid matter—whatever is being flushed—into the air in the form of microscopic particles, like an aerosol. You won’t feel it. You won’t see it. But it’s there. Some experts say you’re not likely to see a big issue with that invisible spray if you keep the book or magazine you brought to the loo clear of the flush. But those same folks will tell you that books and magazines stowed over time in the bathroom run the risk of gradually accumulating a thin layer of microorganisms. In other words, we’re talking about the basic building blocks of slime. On paper, which is absorbent, you won’t see the slime the way you would on, say, a faucet.

If this thought grosses you out, think about things you keep in your bathroom over long periods of time, from room deodorizers to hand towels to soap dispensers. We don’t wash these things just to make them look pretty. We wash them because bathrooms are “germy” places. Those germs are good to keep in mind with any bathroom design or remodel, too. Situate toilets at a distance from countertops where toothbrushes will be stowed. Avoid open/exposed cabinets. Plan for enclosed linen storage. A little germ exposure keeps an immune system strong and on its toes. Much more than that is just plain icky.