Whither Direction of the Toilet Roll?

Few issues have busted up perfectly good relationships and turned reasonable people into screaming debaters than the great toilet roll debate.  The casual question of “over” or “under” can send a cocktail party into a civil war.

There’s probably no real solution to this debate. 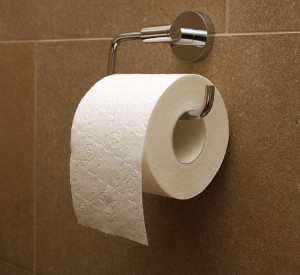 A team of engineers looked into the science of the “over-under” toilet roll debate.  Here’s how the facts shake out:

It seems that a healthy 70% of us will put the toilet roll with the loose end over the roll.  By all accounts, that makes it easier to find the end, and you are more likely to get the exact number of toilet paper tiles you want (if you actually have a specific number in your head).  The engineers even studied the kinetic friction on the paper to prevent accidental tearing… but, we’ll set that aside for now.

The folk from “team under” will note that there’s less of a chance of the roll unraveling onto the ground, and it’s less of a temptation for cats.  From an aesthetic standpoint, it does look much tidier – and with no contact between the roll and wall, the roll can spin freely.

20% of the people surveyed have admitted to flipping a toilet roll when they find it to be the “wrong” way from their preference… which caused an inventor to make the “Tilt-A-Roll,” a special holder that allows you to flip the roll around and staying out of divorce court.

Feel free to debate it here on our website or Facebook page, but don’t go to Wikipedia for any help.  The page called “Toilet Paper Orientation” is twice the size of the page for the Iraq War.